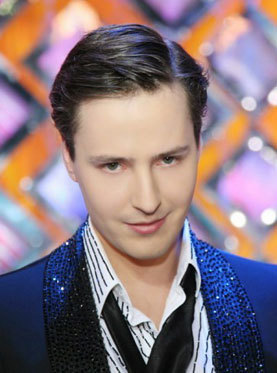 Yes, this is the same man

Vitaliy Vladasovich Grachov (born February 19, 1979), known professionally as Vitas/Витас, is a Latvian-born Russian singer and songwriter. His songs are usually written and performed in Russian, and can be difficult to categorize due to his eclectic style. His career began in 2000 with his performance of "Opera 2," which was released as a single in 2001. Both live performances and the music video have become internet sensations, coming just shy of the meme status achieved by his New Year's performance of "The Seventh Element" for Russian Television.

Since 2005, Vitas has developed a significant fanbase in many parts of Asia, touring extensively in China. His interest in Asian culture has spanned his entire career with him paying tribute to it in several of his songs and music videos, including "Opera #1," "Tibetan Plateau," "Made in China." He has performed duets with many other singers including Demis Roussos, Lucio Dalla, his grandfather (with whom he sings "Friendship"), and his own producer Sergey Pudovkin.

Vitas designs his own stage costumes, which are often flashy and flamboyant. His most notable costumes are those worn during his 2002 concert at the Kremlin, including the one worn during his viral Seventh Element video and his "Guru suit." Other notable costumes include his space warrior outfit for the song "Extraterrestrial Friend" and his string of glittering sequined suits.

He came here to bring you these tropes: