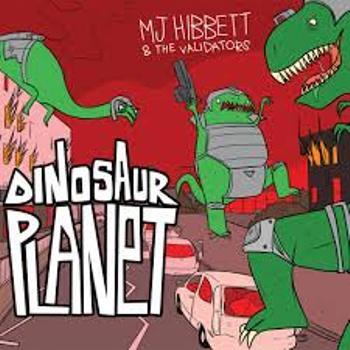 "Sixty five million years ago they disappeared
Now the dinosaurs are back
The human race must learn to live in fear
The earth is under attack
From the DINOSAUR PLANET (oh oh, oh oh)"
Advertisement:

is a 2011 rock opera by MJ Hibbett and the Validators, accompanied by artwork by John Allison of Scary Go Round and Bad Machinery fame.

Strange lights have been seen over the East Anglian city of Norwich. Investigating, the Norfolk police quickly discover the vanguard of an invasion of man-eating dinosaurs from space who quickly rampage through the fenland. Earth's only hope lies in a retired scientist whose forgotten paper on the Theory of the Dinosaur Planet speculated that the dinosaurs flew into space to escape the asteroid. However, the theory proves to have made one small error. The dinosaurs didn't flee to escape the asteroid, but were kidnapped by terrifying robotic slave owners, who are back for revenge...