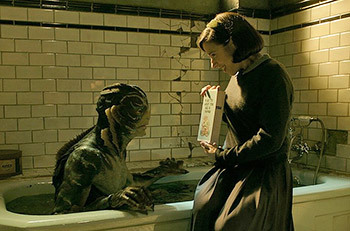 What do you do when your mermaids/Fish People/other aquatic sentient critters can't survive out of water, but you really want to take one home with you? Simple! You stick them in a fishbowl! Or a bathtub! Or anything else that can hold water, really. This allows the aquatic character to interact with the usually human (or at least terrestrial) cast without having to come up with an elaborate new set or location, and there's usually some humor to be mined from a fantastic creature chilling in a mundane fixture like a tub or tank.

This may or may not be a good idea, depending on the tone of the work. More precise logistics (such as the necessary salinity or chemicals present in the water) will usually be glossed over. While this can be played for comedy, more dramatic works' use of this trope will emphasize that the creatures are essentially captive in such a small space, especially if said creature was placed there unwillingly.

A sister trope to Mobile Fishbowl, distinguished by the fact that these containers are (usually, mostly) stationary. They may or may not be absolutely necessary to live, but they're at least important for the aquatic person in question's health.