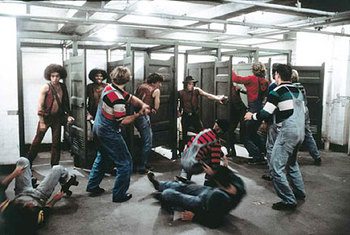 "I don't remember who threw the first punch, but it all went to shit after that."
Advertisement:

Bathrooms are intended for people to... uh, do their business. However, one or more characters decide that it's the perfect place to duke it out. A bathroom brawl can occur in either a public bathroom or a private one, although it is more common for fights to happen in public restrooms. Locker rooms also apply.

Common weapons/attacks that be used in a bathroom brawl may include, but are not limited to: Swirlies, feces or urine, toilet paper, the sink, the mirror, the stall doors, etc.

Similar to Camping a Crapper, although the difference between this trope and Camping a Crapper is that the latter is typically an attack that is planned, while a bathroom brawl does not have to be organized in advance. Often times, it can start out as a simple conversation or an argument, and then build up into a huge fight. Contrast with Bathhouse Blitz where the attack is stealthy, premeditated, and usually takes place when the combatants are nude or only wearing a Modesty Towel.

Can overlap with Toilet Horror if the fight gets incredibly violent or the characters fight something or someone horrifying. If someone ends up getting killed in a bathroom brawl, then see The Can Kicked Him. May involve a Full-Frontal Assault if at least one of the characters was naked (and possibly bathing) at the time the fight starts (which is a given if the fight happens in a locker room since people will be getting naked in there anyway).