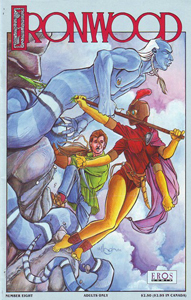 Ironwood follows the adventures of Dave Dragavon, a juvenile dragon existing only in human form (not yet having matured enough to take full dragon form) who is hired by the beautiful Pandora Breedlswight to find the wizard Gnaric in order to free her from a curse.

The comics are a mixture of Sword and Sorcery and adult humor.