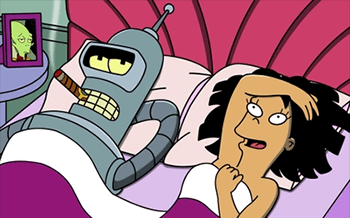 Tasha: Data. You are fully functional, aren't you?
Data: Of course, but...
Tasha: How fully?
Data: In every way, of course. I am programmed in multiple techniques. A broad variety of pleasuring.
Tasha: Oh, you jewel! That's exactly what I hoped.
— Star Trek: The Next Generation, "The Naked Now"
Advertisement:

Any sentient machine, whether robot, computer, or something else, having romantic or sexual relations with an organic life form. The Mechanical Lifeforms version of Interspecies Romance.

Writers will often find a way to state that the robot is anatomically correct, in order to facilitate such interactions.

Such a plot often involves a Robot Girl / Fembot of course, and even a Robotic Spouse.

A Super-Trope to Sex Bot (a sentient machine specifically built for sex).

Compare Robo Ship, Kiss Me, I'm Virtual, Interspecies Romance, Extreme Omnisexual. See Robo Romance if both partners are machines. See Robosexuals Are Creeps for when this is portrayed as creepy. Can be more plausible to understand if the robot in question Was Once a Man.