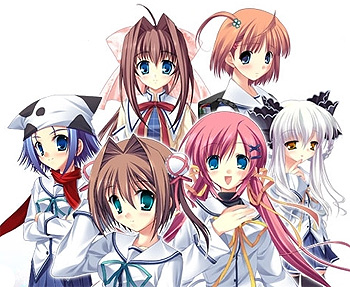 The sequel to the first Da Capo, Da Capo II is set two generations, approximately 53 years after the events of Da Capo.

The sakura tree that Sakura Yoshino's grandmother had planted was again in bloom. The main protagonist is Yoshiyuki Sakurai, a second year student at Kazami Academy. Much like Junichi in Da Capo, he is surrounded by his friends, two of which are male, Wataru and Suginami, and he can also see other people's dreams. He had a friendly relationship with Yume and Otome Asakura, granddaughters of Nemu and Junichi. Yoshiyuki lives in Sakura's home, and she is now the principal of Kazami Academy. His childhood friend, Koko Tsukishima, confesses to him in the first episode and he accepts. He also accidentally awakens a robot, Minatsu Amakase, who hates all humans.

The first season is more lighthearted than the second; the second season trudges deeply into Utsuge territory.

The original Visual Novel was also released in English by MangaGamer on December 24, 2010.