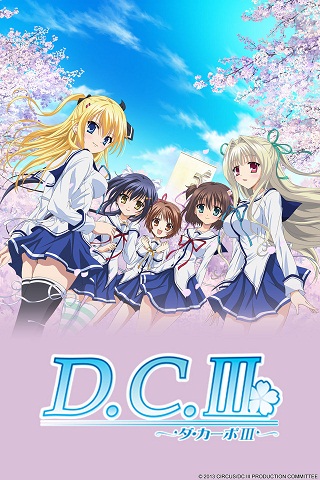 On the island of Hatsune, where the spring scenery lasts all year round, stands a large cherry tree that never withers. The mysterious cherry tree, rumored to grant any wish, is the symbol of Hatsune Island. However, one day, it suddenly turns into an ordinary tree... The scent of spring enhances this slightly bittersweet tale of Sakura and the Kazami Academy Newspaper Club, as on that same day, every single member on that club receives a text message on their cell phones asking them to do something at the tree when it starts blooming. While the "something" was undecipherable, what was more interesting was that the text was dated 1951.

The sequel to Da Capo II, it takes place approximately 20 years after the events from that show.

Released for the Winter 2013 Anime lineup, it is currently streaming on Crunchyroll

A Stage Play Adaptation was announced in 2021, running from November 17 to November 21 of that year in Tokyo's Nissho Hall.

Life tip: try not to get locked in the gym equipment room under any circumstances whatsoever.

Life tip: try not to get locked in the gym equipment room under any circumstances whatsoever.