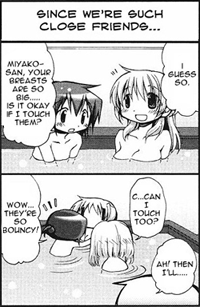 At least they're asking nicely.
Kyou: Kotomi... are you all right? He didn't do anything weird to you, right? Like suddenly clinging behind you against your will or touching your butt and breasts...
Tomoya: Didn't you do that before?
Kyou: It's fine if it's me, I'm her friend after all.
— CLANNAD
Advertisement:

In a highly hierarchical society, communal bathing is seen as a great equalizing social event, vital in establishing a close, healthy relationship with peers and family.

A Furo Scene with girls will inevitably end up with one character admiring another's physical development, with subsequent teasing and tickling. An added gag is a highly flustered male on the men's side of the bath only being able to hear the discussion and either taking it out of context or trying to get a peek, sometimes both. This is commonly used as fanservice, but pops up in Shōjo as well as Shōnen. This fanservice-oriented trope is much rarer with guys, aside from playful horsing around—with the obvious occasional exception of the Yaoi Genre.

A related trope in the West is the Womens' Locker Room, which in a certain kind of work is synonymous with platonic (or not) Les Yay.

Although baths, hot springs, beaches, and locker rooms are the most likely settings, any scene where a girl decides to get playful with her friend's… assets falls under this trope. Even being close friends isn't a hard rule, though you have to question the motives of someone who gropes people they barely know for fun.

Any protest from the one being groped is likely to be responded to with "Don't be silly! We're both girls, so it's okay." Although this almost always works in anime for the sake of fanservice, suggesting it in Real Life is not a good idea. Kids, Don't Try This at Home, there's an almost certain chance you'll ruin a friendship and get charged for harassment.

Compare and contrast with Thanks for the Mammary, Girl-on-Girl Is Hot, and Double Standard: Rape, Female on Female.