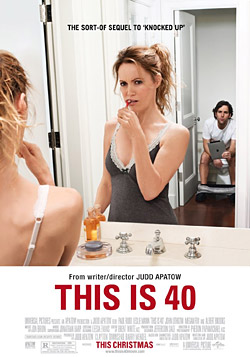 This is 40 is a 2012 comedy/drama film, and the fourth film written and directed by Judd Apatow. It is a Spin-Off (or, as the trailer states, a "sort-of sequel") to Knocked Up, following Pete (Paul Rudd) and Debbie (Leslie Mann) five years after the events of that movie as they deal with the complications of married life, their kids growing up, and the fact that they're both turning 40.