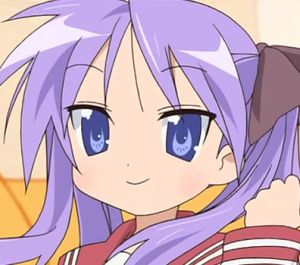 A particular style of drawing eyes in manga and anime where the outer corners slant upwards, ending in a distinct sharp point, used in contrast to the traditional Moe soft drooping style, Tareme. Tsurime symbolizes strong will, arrogance, or pride in a character. Most noticeable in female designs (since it plays against the stereotype) and is a common tell-tale sign of Tsunderes, Emotionless Girls, Sugar and Ice types, and Action Girls. It's also a common (although not guaranteed) trait of the Seme in the Boys' Love Genre. Otherwise, tsurime are quite prevalent in male characters because they convey strong, reliable masculinity.

Not to be confused with Tsundere, though tsunderes commonly sport these sort of eyes.

Note that the "me" in "tsurime" actually means "eyes" in Japanese. We simply wish to be clearer, even if it comes off as redundant.

Its opposite is Tareme Eyes.

If a character normally has Tsurime and switches to Tareme it might signal a change in temperament, personality, or Heartwarming Moments.