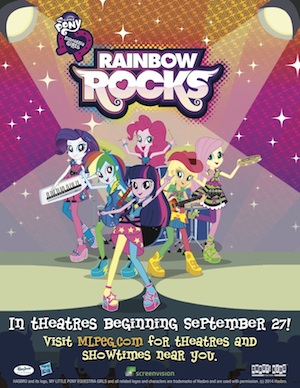 Set between seasons four and five of the show, the film picks up after the original one — Twilight Sparkle has gone home to Equestria and is now the Princess of Friendship, while her friends in the human world have reunited and Sunset Shimmer is attempting to make amends for her evil ways despite the school hating her. However, a new threat enters the scene: three new students, Adagio Dazzle, Aria Blaze, and Sonata Dusk (collectively known as "The Dazzlings"). Using some sort of dark magic channeled by their singing, the trio spreads a Hate Plague across Canterlot High, turning a friendly talent show into a Battle of the Bands. With the entire school under their control and the students turned against each other worse than ever, Sunset contacts Twilight in Equestria to ask for her help in defeating the trio and freeing CHS before whatever scheme they're plotting comes to fruition. Twilight discovers the Dazzlings are dangerous creatures called the Sirens, who use their singing to mind control others into turning against each other and feed on their negative energy to gain power. She returns to Canterlot High and joins her human friends' band, the Rainbooms, and being the only ones who were not affected by the Dazzlings' spell, they must work together to make a musical counterspell and set aside their differences so they can save the day.

A series of self-contained shorts preceding the movie serves as preludes to the story, and the film is followed by several other Animated Music Videos. All of these have their own page: My Little Pony: Equestria Girls – Rainbow Rocks Shorts.

This movie is followed by My Little Pony: Equestria Girls – Friendship Games, the third film in the franchise.

The Rainbooms' performance of "Shake Your Tail" from the shorts suddenly goes downhill with thanks to the other acts secretly sabotaging their performance.

The Rainbooms' performance of "Shake Your Tail" from the shorts suddenly goes downhill with thanks to the other acts secretly sabotaging their performance.