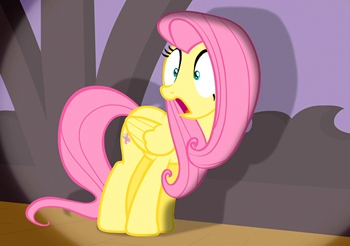 See the mare with the stage fright
Just standin' up there to give it all her might
And she got caught in the spotlight
But when we get to the end
She wants to start all over again...

Fluttershy is greeting the morning and her animal friends in song when the unexpected applause of the Mane Five snaps her back to self-consciousness. Despite their lavish praise, Fluttershy is clearly uncomfortable to have an audience, and she gently but firmly refuses Rarity's offer to join the Ponytones, an a cappella quartet who will be performing at a fundraiser for Fluttershy's Ponyville Pet Center the next day. She loves their music, but she can't bear the idea of singing in front of a crowd. Rarity accepts this graciously, leads her group in a last rehearsal, and tells them to rest their voices for tomorrow. But the next day, Big Macintosh, their bassist, turns up unable to sing — due to losing his voice at a turkey call competition at Sweet Apple Acres — and the Ponytones can't perform without him.

Zecora cannot heal Big Mac's throat in a few hours, but she does suggest a workaround: have "Flutterguy" (Fluttershy's inexplicably deep voice while under the effects of poison joke) perform behind a curtain while Big Mac lip-syncs. Fluttershy agrees to the plan for the sake of the animals. The ruse works, and the fundraiser is a success. After the show, a young filly who has just gotten her cutie mark asks the Ponytones to perform at her cuteceañera. Fluttershy, not wanting to disappoint, persuades Rarity to continue the ruse. This goes on for some time, with the Ponytones asked to perform at various places around Ponyville, and Fluttershy singing with ever-growing enthusiasm while remaining safely out of sight.

Before a highly-publicized show in Sugar Cube Corner, Rarity reveals that Big Mac's voice is all better, and that Fluttershy can stop filling in for him. This disappoints Fluttershy, so they agree to let Fluttershy sing for him one last time. During the performance, Fluttershy gets so into the music that she goes completely off-sync and dislodges the curtain she is hiding behind, revealing her to the audience. The ponies are startled but quickly burst into applause; terrified and humiliated, Fluttershy runs away in tears.

Applejack confronts Big Mac about this deception and easily figures out the chain of events that led to it. The Mane Six find Fluttershy at her house, washing away the effects of the poison joke, but she is in no mood to listen to their praise and reassurance. She bolts a second time, vowing that she will never sing in front of anyone. When they catch up to her again, back at the fundraiser stage, the Mane Six ask Fluttershy what was so bad about facing her worst nightmare, since she's gotten nothing but praise and admiration for it. After a moment's hesitation, Fluttershy realizes that she did enjoy herself, at least a little.

The Ponytones (now as a five-member band) perform another show just for their pony and animal friends. But Fluttershy still refuses to commit to a real performance, saying that she hasn't quite conquered her stage fright. Later on, she confides in the Mane Six's journal that you need to face your fears if they are keeping you from doing something you love or being the best pony you can be.

Pinkie, you and your big mouth.

Pinkie, you and your big mouth.