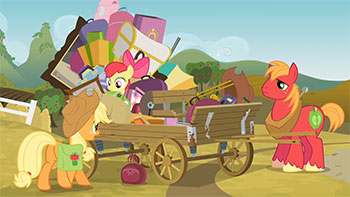 You were only able to carry 100 pounds back to the wagon.
Apple Family: No matter what comes, we will face the weather! We're apples to the core!
Written by Natasha Levinger
Advertisement:

As Twilight Sparkle is studying genealogy, the study of family history, at the Golden Oaks Library, Pinkie Pie reads from a random scroll, stumbling on a discovery: she's part of the Apple family! Due to an old heritage, she's Applejack's fourth cousin, twice removed. Pinkie promptly tells the Apple family, who are overjoyed to have Pinkie as part of their family. But, upon checking the scroll to make sure, the exact name appears smudged (except for the word "Pie"), making Pinkie's link to the Apples unclear. Granny Smith suggests they all load up the wagon and head for the house of Goldie Delicious, another Apple family member, who has extensive knowledge of family history, to find out for sure. As Pinkie leaves to gather her things for the trip, Applejack tells the rest of her family members that they all need to be on their best behavior to make a good impression on Pinkie.

While on the road, the Apple family's wagon breaks, since Big Macintosh overburdened the cart before the trip. After stopping an argument before it starts, Granny Smith decides it's best to keep going, since the wagon broke closer to Goldie Delicious's house than to Sweet Apple Acres. At Pinkie's suggestion, the Apples fashion the broken wagon into a makeshift raft, and head downriver. Pinkie snaps a photo of the family for a scrapbook she's making, having been documenting everything so far. Applejack tries to navigate with a map, but Apple Bloom drops it in the water, causing another argument between the Apples. Granny Smith takes the helm, confident that they've avoided "the scariest cave in all of Equestria," right before leading them directly through it. Fed up, Applejack tries to take the helm from Granny Smith, causing a full-blown argument between the Apples, ending with the raft's wheel flying off, the Apples helplessly flying down a waterfall soon after.

The family makes it to Goldie Delicious's house, all of them dejected but Pinkie. Goldie Delicious is running an errand, which leaves Pinkie with enough time to grab more paper for her scrapbook. While she's gone, the Apples confide in each other about how Pinkie's seen them at their worst, and won't begrudge Pinkie if she doesn't want to be an Apple after all. Pinkie, overhearing, says she still wants to be an Apple, because the Apples never gave up even when things got tough, showing them the scrapbook she's made. And just because they fight, that doesn't mean they don't love each other.

When Goldie Delicious returns from her errand, she finds the Apple family's history book. After finding the page relating to Pinkie, they find the page in question is smudged too, thus the mystery is left unsolved. Though Pinkie's disappointed, Applejack decides it doesn't matter what the book says, or doesn't say; as far as the Apples are concerned, Pinkie's one of them. After returning to Sweet Apple Acres, Applejack plans to write in the Mane Six's diary about how being a good family means going through the rough patches together... right before the Apples start arguing again over who should write the entry and Pinkie cheerfully joins in.

Apples to the Core

While on the road, the Apple family sings about how close their family is alongside Pinkie Pie.

Example of:
Ode to Family

Apples to the Core

While on the road, the Apple family sings about how close their family is alongside Pinkie Pie.