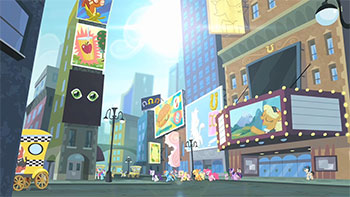 Rarity ♥ Manehattan
Suri Polomare: It takes some small-town fillies a while to learn it's every pony for herself in the big city, 'kay?
Written by Dave Polsky
Advertisement:

Rarity is headed to Manehattan for a fashion show, taking the rest of the Mane Six with her to see the sights of the big city. In particular, Rarity intends to take them to see Hinny of the Hills, a sold-out musical that she managed to earn tickets for, by designing costumes for the play. As befits the Element of Generosity, Rarity takes pains to be a considerate guest and a liberal tipper, for in Manehattan, doing favors for ponies encourages them to be generous in return. The Mane Six have so much fun seeing the sights that Rarity loses track of the time, and suddenly realizes she has only ten minutes to make it to the fashion show's dress rehearsal! Fortunately, her philosophy on favors pays off at exactly the right time — a taxi cab takes her to the show because she helped fix a wheel, and her dresses are delivered by a bellhop she generously tipped.

Arriving in the nick of time, Rarity and the other designers encounter Prim Hemline, a fashion design expert and the host of fashion week, who announces tomorrow is the contest to decide who gets to showcase their designs, and those who lose will have to go home early. After Prim leaves, Rarity bumps into Suri Polomare, an old designer acquaintance from Ponyville. Suri admires Rarity's collection of dresses, which are made with an eye-catching new material that Rarity had created herself. Rarity loans some to Suri to help accent her dresses... only to find, upon arriving the next day, that Suri's presentation line is made entirely of the new fabric, sewn overnight by Suri's meek and overworked assistant, Coco Pommel. Suri shows no remorse, saying that it's every pony for herself in Manehattan. Realizing she'll be seen as a design thief by fashion show director Prim Hemline — whom she's already failed to impress with her late arrival — Rarity bolts from the rehearsal in tears.

Meanwhile, the rest of the Mane Six have been enjoying the sights of the city and are anticipating a fun evening, topped off with Hinny of the Hills. A tearful Rarity bursts into their hotel room and explains her woes, to which the Mane Six offer their support. Comforted, Rarity is able to gather the will to make a new display collection, inspired by the fabrics and trimmings of their own hotel room. She puts her friends to work on the new dresses, growing increasingly deadened to their concerns — like working all night and missing all the sights of Manehattan. When they complain that they'll miss Hinny of the Hills, Rarity snaps and chastises them for not thinking about her career or her happiness. Once they finish, Rarity darts for the show with the new designs without bothering to thank her friends.

Rarity's new line is put on display, and it appears to be a success. However, Rarity's excitement is shot when she sees her friends aren't in the audience, and is stricken with remorse for how awfully she's treated them. A rainbow-hued shimmer suddenly catches her eye, and she dashes from the show in search of her friends at the hotel, only to find they are long gone. Despondent, Rarity returns to the fashion show venue to collect her things and thank Prim Hemline for her time, only to bump into Suri and the rest of the Mane Six (they missed Hinny of the Hills because they merely overslept). Suri tells her that Prim is furious that she ran off, and that she lost the contest. However, Rarity couldn't care less about the show anymore and is relieved to be with her friends, who gladly accept her apologies.

Using her favor to the costume designer, Rarity treats her friends to an exclusive showing of Hinny of the Hills in exchange for a costume designing opportunity that, unfortunately for her friends, will keep her away from Ponyville for a while. At the end of the show, Coco Pommel enters, having quit being Suri's assistant, and tells Rarity she actually won the fashion show, but she and Suri lied to her in hopes Rarity would forfeit. She gives Rarity a gift to apologize, and Rarity in turn sets her up with the costume design job. Back in Ponyville, Rarity muses that having a generous spirit means not returning evil for evil, while behind her Coco's gift of rainbow thread shimmers iridescently.

Rarity sings about her generous spirit, congruent to her Element of Harmony, and hopes to share it with everyone.

Rarity sings about her generous spirit, congruent to her Element of Harmony, and hopes to share it with everyone.