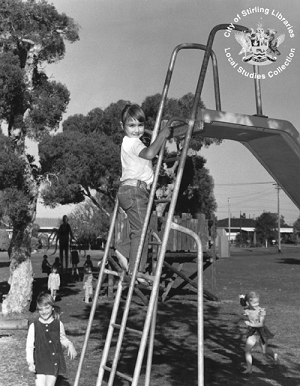 "One of two recovered photographs from the Stirling City Library blaze, taken one week earlier. Notable for being taken the day which fourteen children vanished and for what is referred to as The Slender Man. Deformities cited as film defects by officials. Actual photograph confiscated as evidence."
"We didn't want to go, we didn't want to kill them, but its persistent silence and outstretched arms horrified and comforted us at the same time..."
Advertisement:

There is a figure that does not hide or lurk in the shadows, but stands tall and unseen in the light of day — visible only to its prey as it stalks them. It appears as an extremely tall, thin humanoid in a formal suit with impossibly long limbs and no face to speak of. Its origins are as much a mystery as what — if anything — it wants. Its presence is associated with paranoia, delusions, and even physical illness. Those who see it are often driven to scrawling strange messages and scribbling sketches of a dark, faceless figure — prior to their going utterly insane, or disappearing entirely. The less you know the better, for knowing too much may make you the subject of its interest. You have been warned.

The Slender Man is an internet born character-entity based on the Bogeyman and originating in his present form on Something Awful, created by user Victor Surge in the "Let's Create Paranormal Images" thread. (Slender Man posts start here,

though most of the images are now gone). It soon reached memetic status, spreading through several blogs and videos, and quickly became the horror we know and fear today.

The three most famous entries in the mythos, also known as "The Big Three", are:

In addition, there is many a strange story from people who appear to have seen him, as well as photographs by people who have not been heard from since. A more-or-less full list can be found at here;

the TV Tropes articles for the works can be found in The Slender Man Mythos.

The Alternate Reality Game site Unfiction has a whole forum

dedicated to the mythos, as well as a dedicated stand alone forum at Slender Nation.

Reviews of stories can be found at The Slendy Review

blog. Non-story information can be found at Encyclopedia Slenderia.

is in the works, created by one of our tropers.

And now he even has his own video game titled Slender, available for free. Another video game, which is an expansion of the original with a story and more levels, was released in collaboration with Blue Isle Studios. It is called Slender: The Arrival, and is available to buy on Blue Isle Studio's site.

Unfortunately, in 2014, two mentally ill twelve-year-old girls, Anissa Weier and Morgan Geyser, stabbed their twelve-year-old friend, Peyton Leutner, nineteen times in an effort to please the fictional character. Leutner, thankfully, survived, and the girls were committed to mental institutions. This incident led to the cancellation of the film ''Entity''.

Not to be confused with The Thin Man or either "Tall Man" from the Chzo Mythos and Phantasm.

you finished Reading the page? good for yoU. everythiNg is fiNe. just don't lOok out your windoW.
fou
nd
you
Feedback