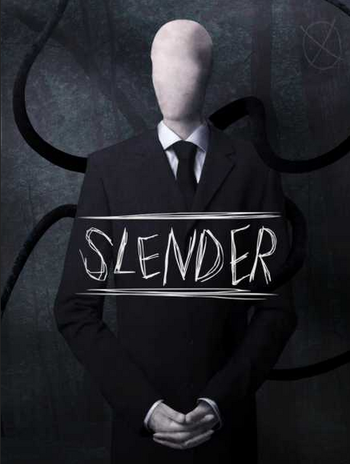 Slender (Slender: The Eight Pages as of version 9.7) is an independent, Unity-engine-based horror game, developed by Agent Parsec and released in 2012. The trailer can be watched here

. The point of Slender is to scare you, but not through the usual methods. Instead of throwing tons of blood and gore at you, it puts you in the role of a helpless Slender Man Mythos protagonist desperately fleeing from the creature stalking your every footstep. You are armed with only a flashlight. It's pitch dark outside, you’re trapped in a fenced-in portion of the woods, and you’re searching for pages that look like they came right out of Alex Kralie’s notebook.

It gets worse. The pages you have to collect are randomly scattered through the huge area spanning the woods and each time you get another page, Slendy closes in on you a little more. He can strike at any time, your only warning being the sound of static. When the screen begins to tear up, the image grows snowy, and the sound becomes distorted, "it" is very near. Then you see it. Just standing there in the dark woods illuminated solely by your little flashlight’s glow. You want to look away. In fact, you have to look away, or else he’ll take you. So just run. Any direction will do. Switch off your precious guiding light, and book it. Run, run all you can until your lungs give up and you collapse. You're sure it hasn’t kept right up with you and isn't about to snatch you up. Right?

The game is very much inspired by Marble Hornets, the web video series that popularized The Slender Man Mythos, flawlessly recreating its most terrifying moments as you scamper through the forest looking for pages and praying to whatever deity you subscribe to that the game doesn’t generate the beast at an inopportune moment when you can’t readily escape. At this time, the game is just a beta, a proof of concept. The pages are randomly distributed in every new game, but there are certain places within the woods where they frequently spawn. The author is currently working on the ‘’real’’ thing and this little practice in terror is just the opening act.

He certainly wasn't kidding. On December 23rd 2012, a teaser trailer was released for the commercial expansion Slender: The Arrival. The game, itself a remake of the original, was released on March 26 2013 exactly at midnight. The Marble Hornets crew wrote the story for the game. You take control as Lauren, a friend of Kate's (the protagonist of the original game), who visits the latter's house just after the Slender Man attacked. She traverses through the scenery (which was remastered quite epically), finding notes of Kate and her friend CR, all the while avoiding the Slender Man and his proxy, a hooded, masked chaser.

Here is the character page.