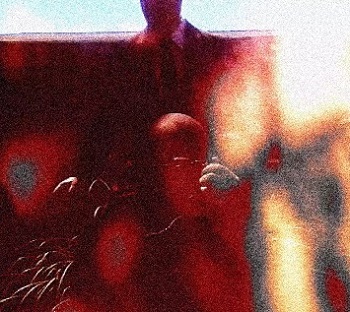 "You're never seeing me again."
Well, you did tell me to be honest.
Advertisement:

Arron and Nick have been friends for about ten years. But after Nick's parents are hurt in a car crash, Arron takes Nick in and they start living as roommates. Wanting to cheer Nick up, Arron convinces Nick to make a vlog with him and put it on YouTube. Being Lovecraft fans, they call it Strange Aeons. However, the vlog quickly falls apart after Nick becomes depressed and antisocial, avoiding cameras at all times. Wanting to do everything he can to help his friend, Arron starts posting all the videos he took of Nick on the vlog channel, to create some form of documentation in case Nick were to seek help. He soon discovers that whatever was affecting him may have been more than just depression.

Strange Aeons is a recent entry into the ever-expanding Slender Man Mythos, having started in early July 2012. Like most vlogs of late, it starts off with a few videos where not much happens, focusing on the relationship between Arron and Nick. But it soon takes a hard left turn into "what the hell is going on?!" territory, especially when Arron ceases being the only one contributing to the channel. Its YouTube page can be found here

Not to be confused with the book with a similar title, the identically-named game, or the youtube commentary channel with the same name but different spelling, STRANGE ÆONS