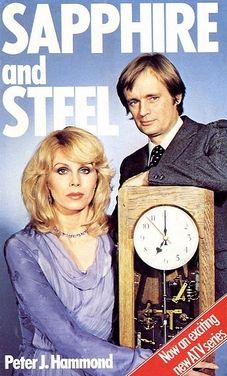 "All irregularities will be handled by the forces controlling each dimension. Transuranic heavy elements may not be used where there is life. Medium atomic weights are available: Gold, Lead, Copper, Jet, Diamond, Radium, Sapphire, Silver and Steel.
Sapphire and Steel have been assigned."
Advertisement:

Sapphire and Steel (1979-1982) is a British series sitting squarely at the intersection of Science Fantasy and Horror. It was created by ATV, one of ITV's regional franchises, and was probably the best of ITV's several attempts to produce or buy in an answer to The BBC's classic-era Doctor Who. The title characters, played by Joanna Lumley and David McCallum, are stoic inter-dimensional agents who protect... um, something. The opening monologue above is really all the explanation we ever get. Their role seems to involve preventing Lovecraftian horrors from slipping in through weak spots in time and snatching things. Exactly what this means — or for that matter, what Sapphire and Steel themselves really are — never quite becomes clear.

Sapphire and Steel were, in addition to being irascible and detached, telepathic. Sapphire also had the ability to "take back time", rewinding it a bit over a localized area, and could deduce the age and background of things and people by touching them (or perhaps the information was being transmitted to her by Mission Control; like everything else, it's not clear). This made her eyes glow blue. Steel, on the other hand, was even more detached and irascible, could sustain a temperature of absolute zero (allowing him to freeze, well, time), and was telekinetic. But mostly, they just stood very still and looked directly into the camera. Given the calibre of the actors in question, this is a lot more interesting — and a lot more scary — than it sounds, and McCallum and Lumley somehow manage to hold it together.

Sapphire and Steel combat these breaks in time primarily by glowering at them. The show used minimal staging and special effects, with cinematography reminiscent of Ingmar Bergman. For example, Steel emptying a refrigerator is the closest thing to an action sequence in the third episode. This lent to the surreal and detached air about the characters, and also kept production costs in the single digits, but often gave the show the pacing of Star Trek: The Motion Picture on thorazine.

Other "elements" (there were allegedly 127, but the 12 transuranics were "unstable" and could not be used) occasionally assisted them: Lead and Silver both guest starred, and others, such as Jet and Copper, were mentioned.

While most other notable British Science Fiction shows were over-ambitious in their special effects, with results ranging from the troubling (Doctor Who) to the disastrous (The Tomorrow People (1973)), S&S simply did not try to do anything the budget wouldn't allow. The result called for milking Surreal Horror for all its worth, creating a show that is, while definitely not for everyone, quite capable of reducing so-inclined viewers to quivering little heaps behind the sofa.

Sapphire and Steel probably influenced The X-Files and Babylon 5. Its creator, Peter J. Hammond, would go on to write for Midsomer Murders. He would also stand responsible for two of the most bizarre episodes of Torchwood, "Small Worlds" and "From Out of the Rain", which are more like Sapphire and Steel than they are most other Torchwood episodes. He also wrote the Doctor Who story "Paradise 5", which would have been part of the original Season 23 (which was cancelled), and was eventually produced by Big Finish.

From 2005 to 2008, Big Finish released a series of Sapphire & Steel audio dramas; unusually for Big Finish's audio ranges, the original cast did not return—bar David Collings as Silver—so Susannah Harker and David Warner were cast in the title roles in a case of The Nth Doctor, which was appropriate anyway. (McCallum, a series regular on NCIS, was living in the US; Lumley simply declined. That said, both are on record as still fond of the series and proud of their work on it.) The series expanding the supporting cast of Elements, adding Gold and Ruby. The range is currently unavailable due to licensing issues.

Along with Blake's 7 and Doctor Who, Sapphire and Steel forms the Holy Trinity of British Science Fiction television.

Sapphire and Steel provides examples of the following tropes:

(Please note that even the name of a trope may be a major spoiler for the episode it appears in.)

Two children are left alone in an isolated house when their parents vanish into thin air, and their only hope appears to be an enigmatic woman and man calling themselves "Sapphire" and "Steel".

Sapphire and Steel arrive at a derelict railway station, where an amateur spiritualist is investigating reports of ghostly manifestations.

A time-travel experiment by historians from the far future goes horribly wrong, and Sapphire, Steel, and their technical assistant Silver have to pick up the pieces.

Sapphire and Steel investigate a junk shop plagued by mysterious disappearances, and the appearance of sinister sepia-tinged children.

Lord Mullrine's retro 1920s-style country house party gets out of control when a dead man comes back to life, and the living guests start suffering violent deaths.

Sapphire, Steel and Silver find themselves in a deserted and time-locked roadhouse with a couple from the 1940s, a former owner of the property from the 1920s, and a sinister hippie street performer from the 1960s, but what exactly is wrong and what they are supposed to do about it remains stubbornly mysterious.