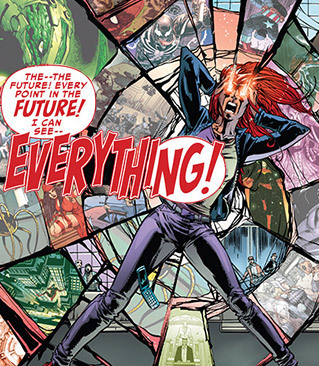 "Aiii, destruction for us all! Pain and fire and the fall of towers. Magic of the strangest sort loosed upon the land! A plague, a pox, the bane of all wizards!"
— Rick Cook, Wizard's Bane
Advertisement:

Fortune Tellers, palm-readers, fire-readers, insect-entrails-on-windshield-readers, and other assorted diviners are canaries in the mineshaft of adventure. They pick up approaching trouble and reveal it in the form of ominous, inconclusive forebodings even when they shouldn't be able to.

That's all well and good for ordinary disasters, but when a Third Eye gets smacked with a half-brick of the end of all things, getting the gravitas across takes a fit. Screams, spasms, visible exhaustion, malfunctioning seer's tools, it's all good. Fainting is not required but makes for a suitably dramatic finish.

Sometimes the interruption means that the prophecy in question is incomplete — in some cases when the seer dies or the props are destroyed, it's because an interested third party is trying to hide the outcome. What all this amounts to is a psychic version of The Worf Effect, and is equally popular with telepaths and empaths. You know shit's serious when the team psi keels over in the middle of a scan.

A Fainting Seer clearly has some actual power: fakes value customer satisfaction. Nothing spoils a date at the fair like a fortune-teller who starts screaming about death, DEATH, oblivion shrouding the land with its brimstone veil, yea, the very HEAVENS dripping with human gore, aaaiiiigh..., etc.

A variation on My Significance Sense Is Tingling. Frequently paired with The Force Is Strong with This One and Poke in the Third Eye. Can be related to or cause even be the cause of Mad Oracle. Can overlap with Power-Strain Blackout. If trouble happens a lot — compare The Ophelia.

Historically, this was an Invoked Trope in many ancient traditions due to the common view that narcolepsy or epilepsy (both commonly referred to as "the falling/sleeping sickness") were signs that one was gifted with prophecy.

See Post-Victory Collapse when the hero breaks down due to physical or mental exhaustion. Subtrope of Fainting.