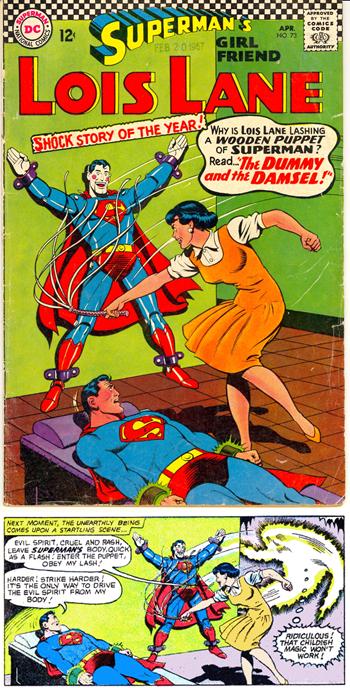 A scene that gives meaning to the image depicted with the title of something, such as the cover art of a book, or the title screen or main menu of a video game. Basically, the graphical version of Title Drop.

Some title screens or covers simply have no alternate meanings to interpret, such as a splash screen or a portrait of the main character. Not this one. This one shows something mind screwy and/or nightmarish that has no discernible meaning to the premise of the series. Or perhaps it depicts something like a weird character or object we haven't seen yet, or a scene that's highly unlikely to happen.

Of course, each time we pick up the book or boot up the game, we see these images, and it becomes burned into our subconscious so much so that we're constantly waiting for it to actually happen and wondering what it means.

...and then comes the Cover Drop, and suddenly it all makes sense. We finally get to see and understand the (usually) profound meaning of the title screen.

This must be executed exactly like a Title Drop. Meaning: