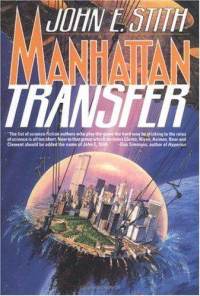 Wheeeeeee!!!!
One sunny day aliens suddenly arrive, rip the island of Manhattan out of New York City, tuck it away in their spacecraft and leave as quickly as they appeared.
Advertisement:

This novel by John E. Stith follows the unlucky residents and folks who happened to be visiting Manhattan that day as they are ripped from the earth, put in a giant spacecraft with a dome over top of them, provided electricity and "food" and pretty much left alone on a vast, interior plain dotted with other, distant, domed, obviously alien cities. The novel deals with their efforts to discover why they have been taken.

Not to be confused with The Manhattan Transfer, a jazz, swing, R&B and pop group founded in 1969.