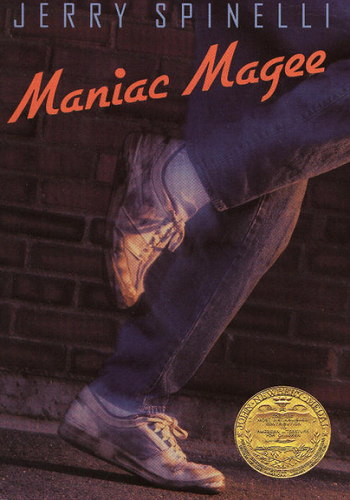 Maniac Magee is a 1990 children's book written by Jerry Spinelli. It features a strange boy named Jeffrey Magee who loses his parents and runs away at age eleven, ending up a year later in Two Mills, a town in Pennsylvania that's divided into two sides: The East End, where all the black families live, and West End, with all the white families. Completely ignorant of how the town works, he meets a girl on the East End named Amanda Beale, from whom he borrows a book.

As the days go by, Jeffrey is sighted all over town doing incredible things - stealing football passes from high schoolers in the middle of practice, rescuing a boy from the backyard of the creepiest old man in town, and running - running - on the steel rail of the train tracks. When he tries to return Amanda's book, he both makes an enemy in "Mars Bar" Thompson, a kid who doesn't like seeing a white boy in his neighborhood, and finds a home with Amanda Beale's family. Months go by and Jeffrey makes a name for himself as the kid who can untie any knot, who runs like a demon, and who doesn't seem to understand that he looks different. He even earns a nickname: Maniac.

But while the Beales accept him into their family immediately, a few citizens of the East End aren't quite as welcoming. Trouble starts brewing for the Beale family, and before they know it, Maniac is off and running again.

The book follows Maniac's year-long search for a home in Two Mills and his attempts to deal with the ugly feelings on both sides of Hector Street, as told by a narrator possibly decades later detailing the facts behind a town legend.

A film adaptation aired on Nicklodeon in 2003, although it was lighter in comparison with the book.

These are the following tropes: