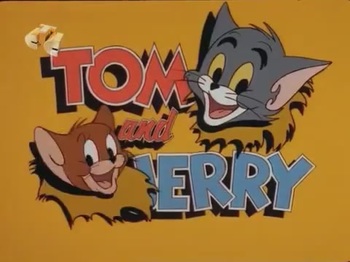 The result of Filmation's attempt to adapt Tom and Jerry to the small screen, The Tom and Jerry Comedy Show aired in 1980 on CBS for 15 episodes in a Three Shorts format.
Advertisement:

Not only did the series bring back the main duo, plus co-stars Spike, Tyke, and Nibbles/Tuffy, but also brought in Droopy as the star of the middle segment, usually pitted against either Tex Avery's wolf character (dubbed Slick Wolf in this incarnation) or the Tom and Jerry version Spike (filling in for Avery's own bulldog named Spike). Also appearing was obscure MGM character Barney Bear.

The new series was much closer to the spirit of the original shorts than its direct predecessor, thanks to the return of the titular duo's animosity towards each other. As such, the series tends to be slightly better received. Emphasis on "slightly", though. While closer in tone despite still having the expected censorship issues, Filmation's run is still criticized for falling into the studio's usual pitfalls (cheap animation, monotonous synth soundtrack, and constant reuse of footage), which have been described as negatively affecting the pacing and timing of the comedy, making the episodes slow and awkward.

Tropes found in The Tom and Jerry Comedy Show include: