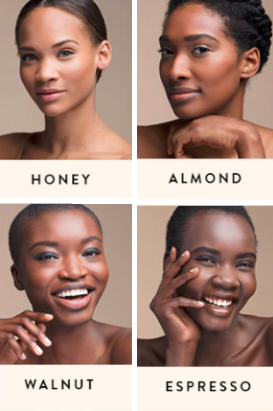 Which shade corresponds to a grande breve latte steamed to 155 degrees with a drizzle of vanilla syrup and a dash of cinnamon?
"Her lips are devil red
And her skin's the color of mocha
She will wear you out
Livin' la vida loca"
— Ricky Martin, "La Vida Loca"
Advertisement:

Black and other nonwhite characters in fiction are often described as having a skin color that looks like some kind of food or drink, usually a coffee beverage. This is especially likely if the character in question is of mixed race or if they are meant to be attractive. Sometimes those two concepts will be mixed together.

When describing the skin of a black person, just calling someone "black" or "brown" cound sound underwhelming. The colors of "black/brown" skin vary more - even more widely than the colors of "white" skin. You may find comparisons of "honey" or "caramel" for the range of golden-browns with the use of "chocolate" or "mocha" for darker shades. "White" skin is most often compared to "cream" or "milk," with "peaches and cream" a fairly common term to refer to a fair complexion with pinkish undertones, alongside non-food descriptors such as "ivory" and "alabaster." You may also encounter mixed-race characters who have "some cream in their coffee". Cafe au lait is another favorite, which resembles the look of coffee and milk; cafe con leche is often used for the same tone when the individual in question is of hispanophone origin (whether Latin American or a Spaniard).note That said, it's also used for mixed relationships involving a brown-skinned Latin American and a White person, so the reader should be attentive. Occasionally other color metaphors will be used; some will be based on food and some will not.

This concept is more common in the United States than in most other English-speaking countries, both because of the USA's greater diversity and (somewhat paradoxically) its rigid color line. There are many Americans who are ethnically ambiguous enough that they won't be assigned to a clear-cut race. All too often, anyone who isn't a paler pinkish-yellow than a medium-rare pork chop (especially if they were born into Islam or one of the "Eastern" religions, or do not speak English as their first and preferably only language) will not qualify as "white", instead being referred to as "olive" or "beige" or just plain "brown."

This trope most often occurs in literature, where the audience can't see the character's skin color, but it is occasionally used in visual media like movies or theater when one character describes a second character. In the former case, it's become regarded as something of a cliché (if not quite a Dead Horse Trope), to the point of "how to write" guides advising aspiring writers to avoid it (especially as some might find it objectifying to be described as food). It's also fairly common in advertising — for example, Cuban sugar sellers used to advertise the colors of their various sugars in relation to pictures of women with analogous skin tones. They ranged all the way from "wild" (dark brown) to "refined" (lily white), with every color in between. Cosmetics is another industry in which this is widespread, which needs to describe a whole range of skin tones to sell products and often resorts to food to make their products sound appealing.