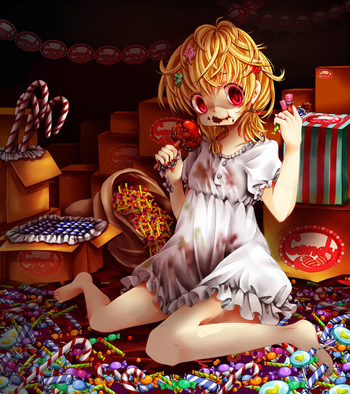 Ukita: Hey, how many sugar cubes did you put in there?!
Chikage: All of them.
— Kenichi: The Mightiest Disciple
Advertisement:

A character who really, really likes their sweets. Everything they eat could be classed as a dessert and if they drink tea it's got so much sugar in it that the smell alone could kill a diabetic.

Sometimes identified as fuel for a hyperactive character. Another common version is for the Genius (e.g. the Gadgeteer Genius, Genius Ditz or Teen Genius) to require lots of sweets — they burn the sugars by thinking extra hard. Something of a Truth in Television: the brain uses glucose as its primary source of energy and not getting enough is bad

. Real Life examples of the Sweet Tooth heed warning, however, because having too much sugar is also bad

— not to mention the risk of cavities.

With adult characters, the same effect can be achieved with much lower doses—after all, most kids are nuts about the stuff to begin with. One frequent shorthand is to show someone adding huge amounts of sugar to tea or coffee (sometimes to the extent of an Overly Long Gag), with a bystander looking on in horror. Another reason for an adult being obsessed with sugar can be to emphasise their immaturity (or more positively, "being in touch with their inner child").

May have some of the tendencies of the Big Eater. If they particularly enjoy lollipops as their Trademark Favorite Food, you may have an Oral Fixation on your hands. In kids' shows, may lead to An Aesop about tooth decay, or instead, A Weighty Aesop.

See also Genius Sweet Tooth, a subset of this Trope, which reflects the tendency smart people have for it.

Not to be confused with the comic and show of the same name.

Chocolatey decides to try a generic candy, and then becomes addicted, escalating it to other sweets.

Chocolatey decides to try a generic candy, and then becomes addicted, escalating it to other sweets.