You may be looking for the 2012 Survival Horror indie game Home, by Benjamin Rivers. 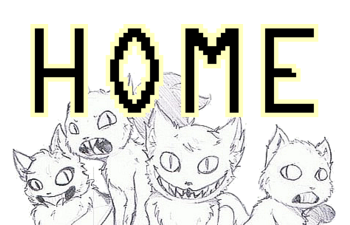 "Everyone in this damned place has lost their minds..."
—The Judge
Advertisement:

This world has been waiting some time for your arrival. The tables of balance has been turned, and the fate of the world trusted into a familiar face. The guardian of zone 0 himself, The Judge. Your job is to lead him on a new journey, masterful puppeteer.

This world is wrapped in an enigma, a shroud of confusion overlapped the once peaceful zones. The true guardian of zone 0 himself has the very marrow of his bones rattled with the feelings of Deja Vu. The day that he would become the marionette of the new world is coming, and upon your very arrival the world will undergo otherworldly changes.

Just what is going on in this world? Why has the switch been reset? Has The Judge forgotten everything that happened? Has the world been reversed to a state of pristine ignorance? Only you can find out, fateful puppeteer.

You will travel the world and become one with your puppet, and in your combined state you will bring the land to the closure it deserves. The fate, and the direction of that closure however, is up to the decisions you make. Choose wisely my friend, it's up to you to save their HOME.

HOME is a fangame based on, and set in, the world of Mortis Ghost's OFF. It was developed by Felix

and the rest of Team HOME over the course of a year or so. It can be downloaded here

Tropes appearing in Home include: