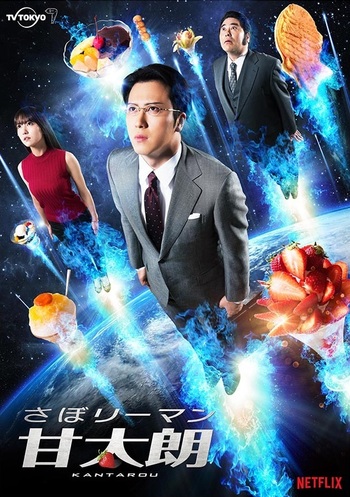 Kantaro: the Sweet Tooth Salaryman (さぼリーマン甘太朗 Saboriman Kantarou) is a live-action adaption of a manga of the same name done by Netflix and TV Tokyo.

It stars a man by the name of Kantaro Ametani, who does sales for a publishing company. At work, he is seen as cool and collected, a master salesman who is very serious and dedicated to his work. However, what they don't know is that Kantaro spends his time in between sales visits to go to restaurants and indulge in sweets, which he writes about in the popular blog "Ameblo" under the name "Sweets Knight". His double-life as a sweets blogger must be kept under wraps, or else he could risk losing his job, and thus his access to sweets.

"Is this the end of the trope page? Only sweet heaven knows!"