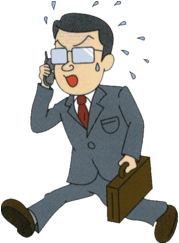 The typical white-collar worker at the bottom of the ladder. In America, they'd be called "peons", "office drones", or "wage slaves"; but in Japan, they're called salarymen (サラリーマン, sararīman).

The essential ingredients for the proper Salaryman include a charcoal grey (or funeral black) suit with proper necktie, a briefcase, glasses, and usually a receding hairline if they're not outright bald. After a night's revelries, a carton of carryout food becomes part of the setup. Add a sake bottle and a Necktie Headband and he becomes the "drunk salaryman" stereotype.

Salarymen are usually portrayed in ways similar to White Collar Workers in American programming: stuck in dull jobs with irritating employers and little chance of advancement. However, as a whole, they tend to be more optimistic. They also have an unfortunate tendency, encouraged by both the Japanese work ethic and their employers, toward both workaholism and alcoholism. Some all but ignore their family, if they have a family, in pursuit of their job, going drinking with office-mates after (unpaid) overtime, going home to sleep for four hours, then getting up to do it all over again.

Frequently in Cyberpunk, this class of character is referred to as a "sararyman" (or "sarariman" - same thing, different spelling), a Recursive Translation playing off the fact that Japanese has no equivalent of the English letter "L". This was a reaction in the late 1980s to the notion that the Japanese were apparently taking over the world financially, and Westerners were suddenly encountering these mid-level types in daily life. In more recent works, the term is from time to time applied to any worker regardless of origin, who follows this optimistic hyper-dedicated philosophy. Salarymen also have quite the niche market in Boys' Love works.

As a protagonist, this is the adult equivalent of the Ordinary High-School Student — a shining example of Japanese conformity ripe for a life-changing transformation at the hands of an extraordinary event/individual/robot — and may well have been one when he was younger. The difference is that the salaryman's disproportionately extensive Back Story doesn't need to be crammed into elementary and middle school. That, plus high school kids don't constantly worry about getting fired. Using him in this way isn't exceptionally common, as these types of stories sell better with younger high school protagonists and supporting cast, even if the target audience is older.

Compare to Office Lady, the Distaff Counterpart (of sorts) to this trope. Contrast the Western equivalent, the Workaholic, whose life is even bleaker and his compromise with his work is tighter.