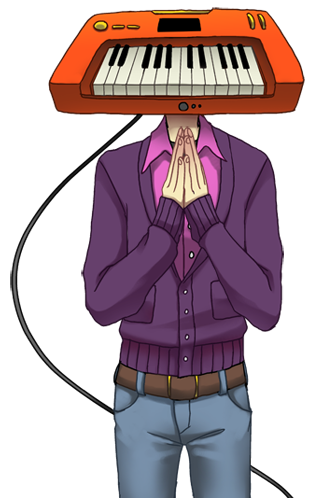 Just a guy who's got a good head for music.
Advertisement:

A being, almost always a humanoid with at least human intelligence, with an inanimate object or an animal head in place of a human head. Depictions of these types of creatures go back at least to Egyptian Mythology, where many deities were depicted with animal heads and human bodies to show their divine natures.

These days, they sometimes appear in Urban Fantasy stories, either as 'living technology' or as explicitly magical beings; for some reason, electronics are particularly popular choices for these characters. What exactly they are varies by depiction- they can be human in all but appearance, Mechanical Lifeforms built for specific functions, Anthropomorphic Personifications who outright embody what they're shown as having for heads, or simply as odd but normal people in a Fantasy Kitchen Sink.

Because of how off-putting a non-human head on a human body is, this is also a common design in works dabbling in surrealism in some way, especially if the head is metaphorical.

They're often shown with their heads floating above their shoulders rather than having necks, in order to save the artist from trying to make the join between a human body and non-human head seem natural; having non-human characteristics other than their heads (odd skin colors or materials, powers thematically relating to their heads, etc.) is also common. They're also always able to talk without the use of a mouth.

Compare The Blank for other types of creatures that lack facial features, Half-Human Hybrid if the result is from genetic engineering, and Beast Man for the characterization trope (zoomorphism). Beast with a Human Face is the inverse, where it's a non-human body with a human head. Sometimes the subjects of Animorphism fall into this trope, if their transformation is only of their head; Skull for a Head can also sometimes overlap if the skull is not of the being's species.

Creepy, nightmare-inflicting entities that live only in the dreamworld, Incubi all sport screens suspended in front of their heads - screens that seem to distort their already eerie-looking faces. It's hard to say if they speak with their own face, or with what's projected on the screen...

Creepy, nightmare-inflicting entities that live only in the dreamworld, Incubi all sport screens suspended in front of their heads - screens that seem to distort their already eerie-looking faces. It's hard to say if they speak with their own face, or with what's projected on the screen...