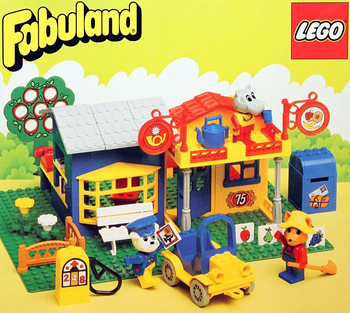 Fabuland was a LEGO theme produced from 1979 to 1989, aimed at children from three to seven. What made this theme unique was the fact that instead of the standard mini-figs, the sets came with Funny Animal characters. The construction manuals of the bigger sets were combined or complimented with stories featuring said animal characters thus explaining who's who, and what her or his role in Fabuland is. Additional story-books could be acquired seperately.

Another notable piece of merchandise was Edward and Friends, a British Claymation TV series involving the Fabuland characters, and with Edward Elephant as the main protagonist. Also, there was the small (only two episodes long) German Language Audio Drama series Geschichten aus Fabuland.

Nowadays Fabuland is rather obscure, although there are a handful of AFOLs out there in the internet who build Fabuland-MOCs (Adult Fans Of Lego who build their (My) Own Creations), set up fan-sites or even produce whole Fabuland-webcomics. Also, Fabuland is apparently still big in Japan. (Really! Look!