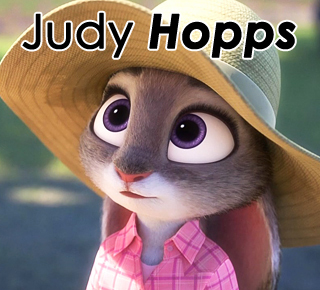 Because rabbits hop a lot. Get it?
Baz: Imagine you're a pixie […] and you have a daughter, and you name her Trixie. Trixie the pixie. […] It's like being a fairy named Mary.
Snow: Or a vampire named Gampire.
Baz: Gampire isn't even a proper name, Snow. You're terrible at this game.
Penelope: In Trixie's defence, the pixies probably don't go around calling themselves "pixies." I mean, you could be a human named Newman or a boy named Roy, and no one would think twice.
— Carry On
Advertisement:

An animal (or sometimes a monster/alien) character whose name is related to their species. It could sound similar (a leopard named Leonard or Leopold), or be related to some characteristic of the animal (a duck named Quack, a bee named Honey).

Since this can overlap with Alliterative Name, please only add examples that go beyond simple alliteration. Conversely, if someone has a name that is their species (whether in English or in another language), that's Species Surname or A Dog Named "Dog". Supertrope to Werewolf Theme Naming. Also closely related to Stock Animal Name, and sometimes Punny Name. Compare A Pig Named "Porkchop" for when an animal name follows this pattern, but based off of a meat or food product.

This trope name itself uses A Noun Referred to as X. See also Steven Ulysses Perhero, for characters whose name or surname allude to their occupation instead of species.