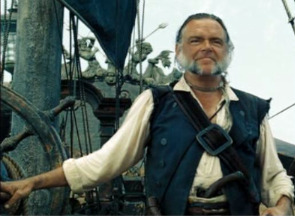 This is a sailor who has endured storms, pirates, fog, and all the perils of the sea. He has been in a Bar Brawl in every port and he has never lost. Sometimes he is a Drill Sergeant Nasty to all the scurvy foc'sle swabs. He is a maritime Old Master. Sometimes he develops a Big Brother Instinct toward the Plucky Middie. But he is a lord of the sea and all sailors must heed him or endure his wrath. Often wears a Sea Dog Beard.

Can end up The Storyteller with all the tales he has to tell about his adventures and the wonders and dangers of the sea. If he actually serves in a Navy then he's likely to cross over with Old Soldier.

Compare and contrast Lord of the Ocean, who is often more aggressive and temperamental due to the association with more "active" water (ocean waves), and Water Is Womanly, usually more calm and graceful as associated with more "still" water.