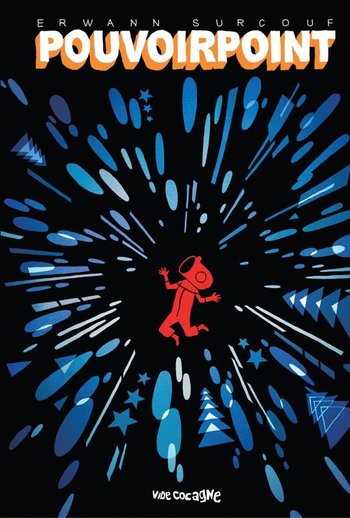 In space no one can hear you ch-boing
Advertisement:

Pouvoirpoint is a comic book from 2016 by French artist Erwann Surcouf.

The story takes place in a timeless future, distant but already vintage, where Terrans colonized the neighboring solar systems. We follow the life of a trainee graphic designer on board a large trading spaceship, time for a trip of a few months from Earth to Alpha Centauri.

On an absurd tone, we discover with him the life of the ship, between office everyday life and major science fiction themes (hyperspace jumps, alien threat).

The story is divided into ten chapters, from boarding to the arrival. But in the prologue and interspersed between each coloured chapter, furious black and white scenes occur, telling the end of the story: shooting and explosions burst, the ship and the characters seem in very bad posture, nothing goes.

The whole story of Pouvoirpoint could be summed up in one question: how did they get there?

The trailer and more information can be found on publisher website.

Also, an original score has been created

(one track for each chapter), allegedly made by one of the characters.