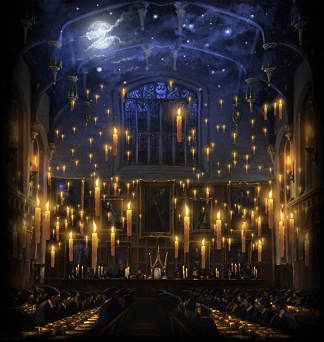 Typical night at the Great Hall.
"Home" consisted of a room on a subsurface level of a huge apartment building. Once, the Jiffi-View Company of greater Cleveland came by every six months and created a 3D projection, animated, of a view of Carmel, California. This "view" filled his room's "window," or ersatz window. However, of late, due to his bad financial situation he had given up trying to imagine that he lived on a great hill with a view of the sea and towering redwoods; he had become content — or rather resigned — to face blank, inert black glass.
— Galactic Pot-Healer, by Philip K. Dick.
Advertisement:

This trope is where a sufficiently large interior of a building has an artificial "outdoors" area to it; commonly (but by no means always) comes with plants, animals, as well as imagery of clouds and sun.

This can be accomplished by varying means; using holograms is the most common choice (either technological or magical), although something as mundane as decorating the ceiling and walls with outdoor imagery also counts here.

Sometimes may involve City in a Bottle or Domed Hometown, in which case this illusion may or may not be a privilege for a certain class of people. The common plot involving such a setting can be either the governor of said place deceiving its denizens with faked scenery while hiding the real one (which is usually worse) to the common public, or when said denizens willingly put a more beautiful imagery over the worse real atmosphere (this one can happen in regular buildings as well). It may even be part of a Lotus-Eater Machine or Pocket Dimension.

Sometimes this will be a part of a Virtual Training Simulation; creating artificial scenery for a training stage is a common feature. May overlap with Not So Remote if either the audience or the characters aren't aware the display is artificial. May be part of a Fake Town.

Compare Weather-Control Machine or Weather Manipulation, where the weather is real but is artificially made. See also Skybox, which is essentially a non-in-universe version of this used in nearly all video games.