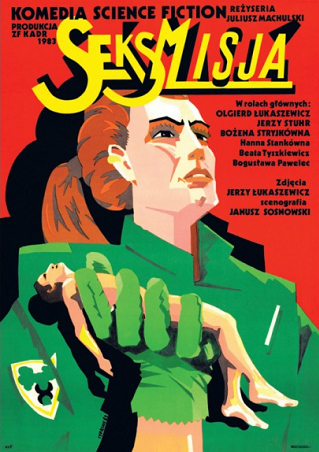 Two men, Albert and Maks, are chosen to be cryogenically hibernated as part of a test. However, something goes very wrong and they are left frozen for many more years than they were supposed to. They wake up in a post-apocalyptic underground totalitarian world inhabited entirely by women, and find themselves defending the very fact that they're men. In the future, it seems, all of history has been re-written to only star female heroes, and men have since been done away with entirely. But is everything as it seems, and are men really useless, like the new society claims? Can Albert and Maks turn the world back on the right track?

The ensuing adventure is part sci-fi sex comedy, part harsh criticism on Eastern European communism. Or any totalitarianism. And while it would appear to be first and foremost a pamphlet against radical feminism as well today, that was not really the case when the movie first came out, as in the Eastern Bloc feminism was never actually allowed to develop anywhere beyond its early 20th century form, i.e. granting women voting and divorce rights. Still, that did allow Sexmission to escape the fate of an overwhelming majority of comedies made in Eastern Europe during the communist era, namely being seen as hopelessly obsolete and confusing a mere few years after Soviet collapse. For these reasons, the film is still well-loved in Poland and other post-communist countries.