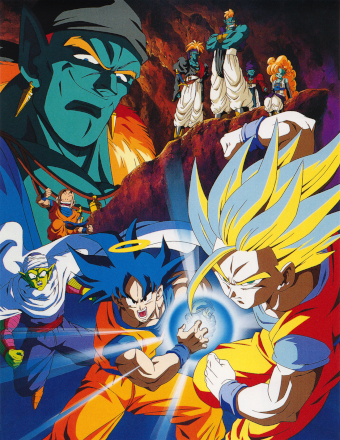 Dragon Ball Z: Bojack Unbound (known in Japan as Doragon Bōru Zetto: Ginga Giri-Giri!! Butchigiri no Sugoi Yatsu; lit. "Dragon Ball Z: Galaxy at the Brink!! The Super Incredible Guy") is the ninth Dragon Ball Z movie. It was released in Japan on July 10, 1993, between episodes 196 and 197. The English version was dubbed by Funimation Entertainment in August 17, 2004, and it was digitally remastered and re-released on February 10, 2009.

The Z Fighters compete in a martial arts tournament advertised as "intergalactic," but it's really a birthday gift for a rich kid who wants to meet aliens.

His parents and Mr. Satan plan for a group of actors to show up as "aliens," but when the tournament is taken over by Bojack, an evil scourge from Planet Hera who escaped the imprisonment placed upon him by the four Kais when King Kai's planet was destroyed, and his fellow Heraian space pirates the Galaxy Soldiers, Gohan and his friends must work together to stop Bojack and his minions.