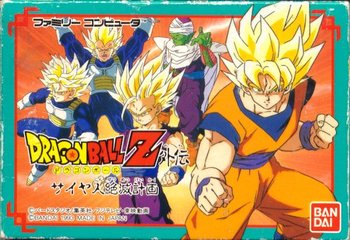 Dragon Ball: Plan to Eradicate the Saiyans (サイヤ人絶滅計画, Saiyajin Zetsumetsu Keikaku; lit. "Dragon Ball Z Side Story: Plan to Eradicate the Saiyans") is the fourth installment of the Gokuden series of Famicom games with a completely original plot as opposed to what came before it. It later was adapted into the first Dragon Ball Z OVA as a visual guide to the original game. The OVA was later remade into a shorter but updated bonus movie for Dragon Ball Z: Raging Blast 2.

Dr. Lychee is one of the only survivors of the Tuffles, who were massacred by the coming of the Saiyans in the original anime adaptation. Lychee managed to escape with a capsule and found refuge on the Dark Planet, a world at the end of the universe. Now, his only wish is to eradicate the last remaining Saiyans, using a deadly substance known as "Destron Gas" to slowly destroy all life on planet Earth.

While an Excuse Plot in general, the core ideas and concept were later better explored in Dragon Ball GT, which also includes the Tuffles and a villain who was no better than the Saiyans he so detested, and Dragon Ball Super, where a Tuffle and another warrior who greatly resembles Hatchiyack, Aniraza, appear in the Tournament of Power.

For the Dragon Ball Z Abridged version (which is retitled The Plan to Eradicate Christmas), see here.