However, due to positive reception, Broly became a Breakout Villain in the franchise, appearing in almost every videogame of the series, is the star of four movies, a cinematic attraction at Universal Studios Japan (in a new form called Broly God), as well as gaining a Distaff Counterpart expy in the form of Universe 6 fighter, Kale.

Broly himself would finally become a Canon Immigrant in 2018 with the film Dragon Ball Super: Broly, but as a completely new character, ignoring his previous appearances, but taking the core element of the character. This new version of Broly is also referred by the name "Broly: BR" by Dragon Ball Heroes and other forms of media in order to keep him apart from the original.

This article is about both versions of the character.

Also, his power is maximum. 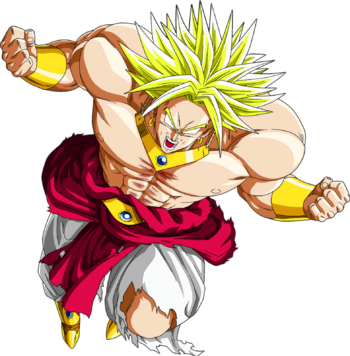 The legendary Super Saiyan, as in the first Saiyan to achieve Super Saiyan status. Right from birth, he had a power level of 10,000. But his early life wasn't pleasant due to 1) The then baby Goku's constant crying next to him and 2) King Vegeta fearing that Broly would overthrow him and ordering him killed despite the protests of his father. Luckily for him, Frieza blew up the Saiyan homeworld and Broly's massive power saved both his and his father's lives. It didn't get any better after that, however, especially when his father launches a campaign to rebuild the Saiyan empire which brings him back into conflict with Goku.

After a very tough fight in which Broly practically trashes all the Z Fighters, he's eventually defeated and left for dead on New Planet Vegeta before Comet Camori destroys it. However, by some fluke, he manages to survive and get himself to Earth via a space pod. He enters a seven-year-long coma, only coming out of it when hearing Goten crying, and once more continues his rampage against the Saiyans but is once again beaten and seemingly finished when he's hurled into through the sun and has his heart ripped out at the other end. However, his blood was collected and he wound up cloned in a misguided attempt to gain money. This time though, Broly comes back very deformed, slime covered and hardly resembling what he once was. After another lengthy fight, he was beaten when the fluid covering him is solidified in water. A final Kamehameha finishes him for good. 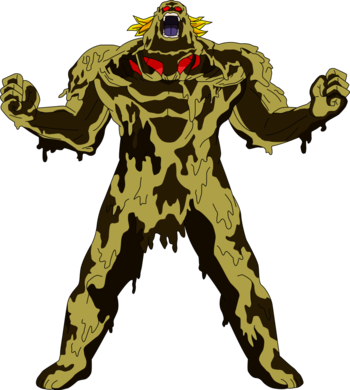 A clone of Broly. 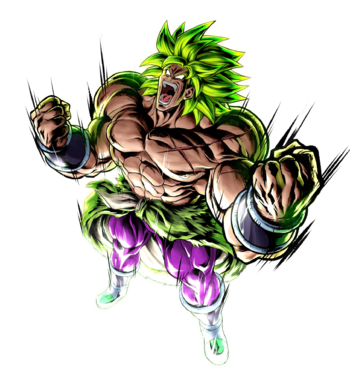 An outcast Saiyan sent to the distant planet Vampa by King Vegeta due to his immense power as a child. He was later found by the Frieza Force and made to join them in order to fight Goku and Vegeta.