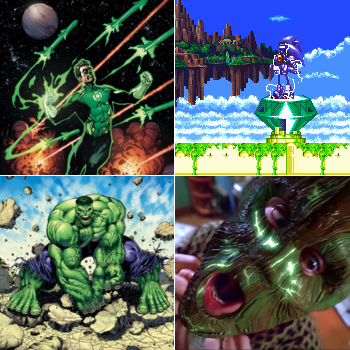 L - R, top to bottom: The Green Lantern Ring, the final boss charging up from Sonic 3 & Knuckles, The Incredible Hulk, a person wearing The Mask
For some reason, the color green is associated with mystical/mysterious powers. In fiction, the Artifact of Doom or the phlebotium glows green or is made of emerald. Sometimes, a character himself is this if his green skin is a distinctive feature.
Advertisement:

Possibly due to the fact that normally nothing gives off green or purple light except from artificial sources. Natural incandescent light (such as flame) is red, orange, yellow, white or more rarely blue.

This trope is also why Green Rocks are named so, even though the trope does not require the color. Mystical Jade can given this lighting due to the historical properties of jade being supernatural.