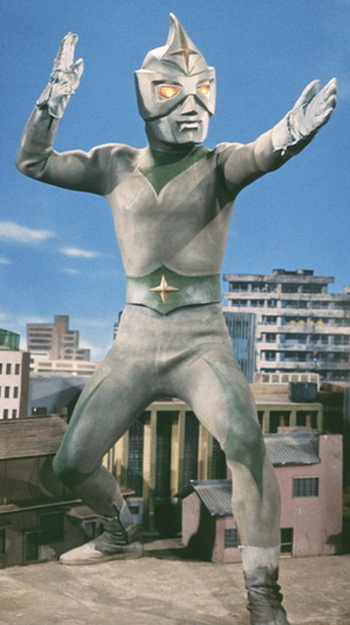 Mirrorman is a tokusatsu series from Tsuburaya Productions, the same guys behind the Ultra Series. It ran from 1971-1972 with 51 episodes on Fuji TV and was the first superhero series by TsuPro to not star any Ultramen.

In the 1980s, race of malevolent aliens known only as The Invaders are attacking the Earth using their army of kaiju. Assigned to investigate the threat are the Science Guard Members (SGM), but there is another hope for the world. Young photojournalist, Kyotaro Kagami, has just learned from his adopted father, SGM's leader Professor Mitarai, that he is in fact the son of an alien man from the 2nd Dimension and a human woman (both of whom are missing). As a result, Kyotaro has inherited the powers of his father, who took on the form of a giant hero named Mirrorman to battle The Invaders in the past. Now it is Kyotaro's duty to take the mantle of Mirrorman, transforming into the title hero by looking into any reflective surface, flashing his Mirror Pendant, and shouting "Mirror Spark!"

Described by Tsuburaya Productions as being the Moon to Ultraman's Sun, Mirrorman was a very dark Toku series (at least initially), going places that TsuPro had never gone before. While it never achieved the same level of success that Ultraman did, the series proved popular enough that a short series called Mirror Fight was broadcasted on TV Tokyo in 1974. And then in 2005, a Direct-to-DVD series called Mirrorman REFLEX was released, and while it was more in tone with the early part of the series, was also pretty much related In Name Only. Additionally, Mirrorman was homaged in the Ultra Series with the introduction of an Expy called Mirror Knight, who debuted in Ultraman Zero: The Revenge of Belial.

To celebrate its 50th anniversary in 2021, a Continuity Reboot manga

by Masato Hisa (Nobunagun, Area 51) has been revealed; Mirrorman 2D. It is serialized on Tsuburaya's streaming service TSUBURAYA IMAGINATION starting on July 30th.