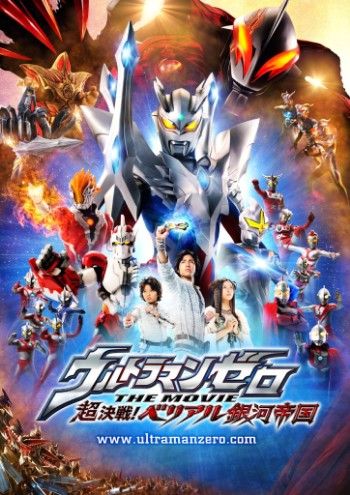 Ultraman Zero: The Revenge of Belial (known as Ultraman Zero The Movie: Super Deciding Fight! The Belial Galactic Empire) is a 2010 film made by Tsuburaya Productions and directed by Yuichi Abe for the Ultra Series. It serves as a sequel to the Mega Monster Battle: Ultra Galaxy Legends movie and focuses on Ultraman Zero as its main hero. It was followed by a sequel movie Ultraman Saga, which was released 2 years later in 2012. The movie itself is notable for several homages of other Tsuburaya characters joining Zero, such as GlenFire, Mirror Knight and Jean Bot.

Somewhere in another universe, Ultraman Belial has set himself up as Galactic Emperor Kaiser Belial, despotic ruler of the galaxy. He has set his sights on the planet Esmeralda, wanting its emeralds for their great power. The planet itself is decimated, with its champion Mirror Knight infected by Belial's evil. All seems lost for this universe.

Meanwhile, in the M78 universe, Darklopses are invading. They are all easily dispatched thanks to Ultaman Zero and his father Ultraseven. Upon inspecting a Darklops core, The Ultras see that the energy is coming from another universe. Zero is sent, with the "Zero Bracelet" as a backup power, to investigate who is attacking Galaxy M78 and why. Taking the form of Run, a young man from the planet Anu, he goes with Run's brother Nao, Princess of Esmeralda Emerana and her ship Jean Bird, they travel the galaxy making allies with the Pirates of Flame and Glen Fire, cleanse mirror Knight and the hunt for the fabled "Shield of Baradhi" to stop Belial's evil once and for all...

Ultraman Zero: The Revenge of Belial provides examples of the following tropes: