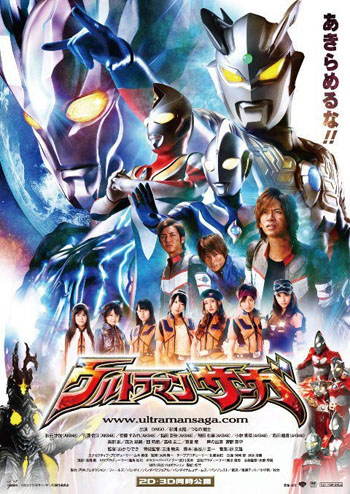 Ultraman Saga is a 2012 film made by Tsuburaya Productions and was directed by Hideki Oka for the Ultraman Franchise. It serves as a sequel to Ultraman Zero: The Revenge of Belial and is the 3rd movie of the Ultraman Zero trilogy. This film is notably for revealing the return of classic Heisei Ultras, Ultraman Dyna and Ultraman Cosmos, as well as the villain Alien Bat, who first appeared in the series, Return of Ultraman.

Somewhere in another universe, the evil Alien Bat has abducted the entire population of Earth with the exception of a minor few children and is creating a massive monster that feeds on their fear and despair. This monster is none other than Zetton, the first monster to have beaten Ultraman!

Meanwhile Ultraman Zero, whom is still living in yet another different universe (from "previous events") has heard the distress calls from the Earth that Alien Bat is ravaging and thus heads there to stop Alien Bat's tyranny and save the Earth from Zetton. Merging with Nozomu Taiga, a young pilot of Super GUTS, Zero joins with makeshift Earth Defense Force group Team U, as well as Musashi Haruno, (Ultraman Cosmos) and Shin Asuka (Ultraman Dyna), together the team of heroes set out to stop Alien Bat and Hyper Zetton from conquering the Universe.