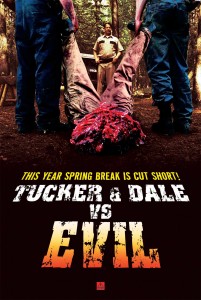 Tucker & Dale vs. Evil is a 2010 horror-comedy film directed by Eli Craig.

Quick, just how many times have you heard setups like this before? A bunch of college kids are going into a forest in West Virginia to party and generally have a good time. On Memorial Day weekend, of course. On their way to the place, they encounter some creepy-looking hillbillies at the gas station. Soon things escalate and they find themselves locked in bloody combat involving the rural against the urban.

Sounds pretty standard, right? However, in this case, the kids are not the oppressed protagonists… it's the hillbillies.

Meet Tucker (Alan Tudyk) and Dale (Tyler Labine). They are two best buds who have taken a little vacation to fix a cabin in the woods which Tucker has bought. On their way there, they ran into the aforementioned college kids at the gas station. They inadvertently give the wrong first impression and the kids are convinced that they are typical creepy backwood hicks like the ones in movies. Later on, our two heroes meet the kids again when they are fishing. They accidentally scare the female lead of this film, Allison (Katrina Bowden), when she's about to go for a swim and she almost drowns. They save her and take her home with them to recover, but again they give the wrong impression about themselves and the college kids think they have actually kidnapped her. Several accidents and more misunderstandings later, the planned vacation goes south big time for our duo as they have to give it their all against… EVIL.

While deconstructing the killer hillbillies sub-genre, this 2010 horror comedy film also works as an Aesop for proper communication and the dangers of profiling.

Be careful around woodchippers, all of you: