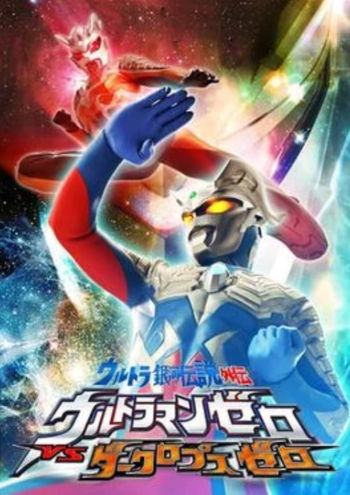 A routine training exercise had Zero suddenly being assaulted by robotic clones of the Ultra Brothers: Ultraman, Ultraman Jack, Ultraman Ace, and Zoffy. While Zero fends off their attacks, the crew of the ZAP Spacy Pendragon (after their adventures in Ultra Galaxy Legends) gets ambushed by the robotic copy of Ultraseven, forcing them into the same planet where Zero is being ambushed.

After a series of battles, Zero and the Space Pendragon discovers the source of the robotic Ultramen clones to be from an Alien Salome (last seen in Ultraseven) facility on the planet, where the aliens are mass-producing fake Ultramen to take over the universe. Besides the Ultras, the aliens also have their trump card, a robotic duplicate of Ultraman Zero called Darklops Zero, whose Artificial Intelligence is starting to develop a mind of its own...

Tropes related to characters in the film is documented on the main characters' pages.