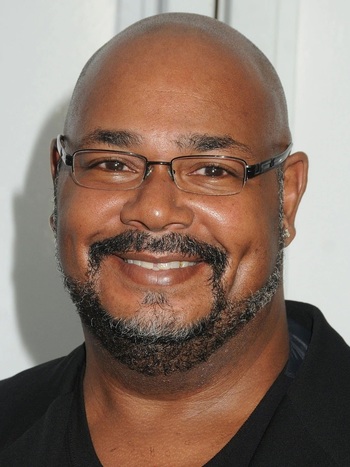 A classically-trained actor, Kevin Michael Richardson (born October 25, 1964 in The Bronx, New York) first gained recognition as one of only eight U.S. high school students selected for the National Foundation for the Arts' "Arts '82" program, winning him a spot on a PBS special directed by the esteemed late John Houseman and a scholarship to Syracuse University. He is very grateful for the opportunities that have been presented to him since.

Kevin has been more widely heard than seen through the hundreds of animated, commercial and video game characters he has created over the past years, due largely to his deep, distinctive voice. He was heard in theaters as the voice of Thaddeus in Animatrix: Final Flight of the Osiris in addition to being featured in The Matrix Revolutions, as the character Deus ex Machina. Kevin was also seen in The WB's family comedy Like Family as the patriarch of an extended family that includes his wife's best friend and her teenage son. He was featured in the hit animated movie Lilo & Stitch and continued in the animated series of the same name as Captain Gantu. Other animated feature films include The Country Bears, Rugrats in Paris: The Movie, Recess: School's Out, Whispers: An Elephant's Tale, All Dogs Go to Heaven 2 and The Wild Thornberrys Movie, in which he voiced the mystic Shaman Mnyambo, a role he also portrays in the television series.

Among the numerous animated television series roles he can be heard in: Uncle Oswidge in Dave the Barbarian, Glorft Commander and other characters in Megas XLR, Dr. Pain in The Proud Family and Robert Hawkins in the Kids' WB! show Static Shock. Other memorable characters Richardson voiced include The Boogeyman in The Powerpuff Girls, Barney Rubble in The Flintstones: On The Rocks and Plato in the PBS series Adventures from the Book of Virtues. Richardson's primetime characters include Mr. Hudson and Rasta Man in The WB's The PJs. Other animated series include SpongeBob SquarePants, Justice League, Buzz Lightyear of Star Command, Lobo (Webseries), Teenage Mutant Ninja Turtles (2012) and Samurai Jack, just to name a few. In the realm of video games, Kevin has voiced characters for many PC and Playstation games including Enter the Matrix, Indiana Jones and the Emperor's Tomb, Star Wars, Crash Bandicoot and Baldur's Gate. Mostly, Richardson is known for playing African-American men who are either goofy or threatening, but, as the role list below demonstrates, Richardson has a broader range than that, often playing white men and sometimes characters that aren't even human (but, in some cases, can be coded as such, as seen with Exile Mikhailovich Zanhusky from Road Rovers, who sounds like a Russian man, but is a Siberian husky).

Kevin has also lent his voice to countless film and television promos, including the voice of the smiley-face price-buster for Wal-Mart, spokesman for Southwest Airlines, the announcer for the 2000 Emmy Awards and the voice of numerous Kids' WB! promos.

In front of the camera, Richardson has appeared in films, television and commercials. He is especially proud of the three-episode arc on ER in which he portrayed Patrick, a mentally-challenged young man. He was featured in the pilot for The Next Big Thing starring Sara Gilbertnote the actress who played Darlene Connor on the 1990s sitcom Roseanne and previously essayed the role of Vashti in the series Homeboys in Outer Space. His feature film appearances include Bound (1996) with Joe Pantoliano and Jennifer Tilly, BASEketball by South Park creators Trey Parker and Matt Stone, and the Carl Reiner film Fatal Instinct.