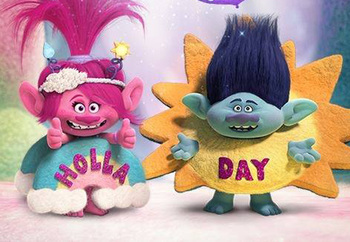 Poppy and Branch in their costumes from one of the special's songs.
Advertisement:

Trolls Holiday is a 2017 animated Christmas TV special produced by DreamWorks Animation. Part of the Trolls franchise, it takes place some time after the events of the first movie. It is also the first DreamWorks production to be distributed by Universal since the former's acquisition by the latter.

After the Bergens removed Trollstice off their calendar, Poppy realizes that they don't have any other holidays that can be celebrated, so she and the other Trolls decide to help them find one.

A sequel correspondent to Trolls: World Tour, titled Trolls: Holiday in Harmony, was released on November 26, 2021 on NBC.