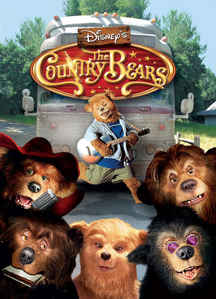 The Country Bears is a 2002 American film, produced by Walt Disney Pictures and directed by Peter Hastings, based on the Disney Theme Parks attraction Country Bear Jamboree. It was Disney's third movie based on a ride or attraction, following Tower of Terror (1997) and Mission to Mars (2000), and followed by Pirates of the Caribbean: The Curse of the Black Pearl and The Haunted Mansion. It was released July 26, 2002.

The film follows Beary Barrington (Haley Joel Osment) a young bear raised by a human family in a world where humans and talking bears coexist, attempting to trace his roots. He meets up with the Country Bears, a long-since broken-up band and helps the Country Bears reunite for one final concert. The film details the Country Bear's attempts to get together their final concert while facing the antagonism of Thimble (Christopher Walken), who is bent on destroying their concert hall.

The Country Bears provides examples of: