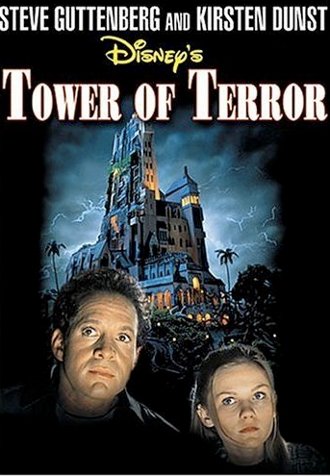 Buzzy: Comin'?
Q: What, are you kidding, man? No way, this place is haunted.
Buzzy: Yeah, right.
Advertisement:

Before Pirates of the Caribbean, this 1997 Made-for-TV Movie was the first film to be based on a ride from the Disney Theme Parks, in this case The Twilight Zone Tower of Terror (though the film has no stated connection to The Twilight Zone). It was written and directed by D. J. MacHale, and premiered on ABC on October 26, 1997.

In 1999, a disgraced reporter named Buzzy Crocker (Steve Guttenberg) is stuck writing stories for the National Inquisitor tabloid after he submitted a false story to the Los Angeles Banner. He meets an old woman named Abigail Gregory (Amzie Strickland), who tells him the story of the Hollywood Tower Hotel, which was closed down back in The Golden Age of Hollywood after lightning struck the elevator and killed its five passengers sixty years earlier.

She claims that Emeline Partridge (Wendy Worthington), the nanny of child actress Sally Shine (Lindsay Ridgeway), was responsible for the horrible event, which put a curse on the hotel, trapping their spirits there. She begs him to go into the hotel and collect some items she needs to break the curse. Along with his niece Anna (Kirsten Dunst) and the inheritor of the hotel, Chris "Q" Todd (Michael McShane), Buzzy ventures into the hotel and is surprised at what he finds.