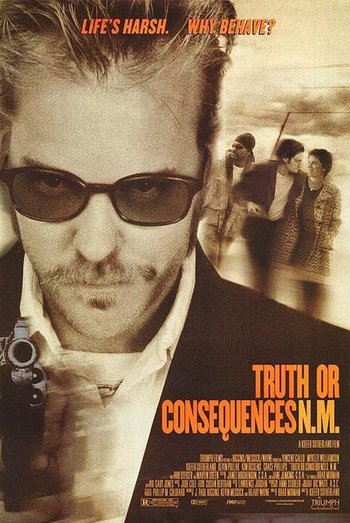 Truth or Consequences, N.M. is a 1997 crime thriller directed by and co-starring Kiefer Sutherland.

Small-time mobster Raymond Lembecke (Vincent Gallo) has just been released from prison and is reunited with his girlfriend, Addy Monroe (Kim Dickens). Raymond, along with Addy and his friends Curtis (Sutherland) and Marcus (Mykelti Williamson), decide to rip off Raymond's boss by stealing all his drugs from one of his abandoned warehouses. Only one problem: it's not abandoned. And to further complicate the situation, trigger-happy Curtis murders both of the mobsters present in the building. And to further complicate that situation, one of the dead mobsters is revealed to be an undercover DEA agent. A shootout ensues, and the four criminals are forced to flee with the drugs.

The rest of the movie centers around the four criminals traveling across the country so they can sell the drugs to a mob boss named Tony Vago (Rod Steiger). And, as they continuously evade the cops as well as mafia hitman Sir (Martin Sheen), they soon realize how complicated their situation is when they're forced to kidnap two pedestrians named Gordon (Kevin Pollak) and Donna (Grace Phillips). It isn't long before the criminals' lives slowly begin to spiral out of control.

Has no relation to the Game Show Truth or Consequences (although the Real Life town was named as such in order to win a contest hosted by the eponymous game show).

Tropes present in Truth or Consequences, N.M. include: